This March, we're taking you on a tour of the Old World, with a focus on how traditional European dishes are influencing modern cuisine.

Athens is nothing short of overwhelming. The city is thousands of years old and has about as many places to grab a bite to eat. It can be hard to uncover the most authentic meal available, and if you're a first-timer, the odds are not in your favor.

To help navigate the plethora of cafés and tavernas, we tap into the mind of Greek chef Diane Kochilas. The New York native has channeled her family's roots to become one of the most prolific names in Greek cuisine, both here and abroad. She also welcomes guests into her Aegean island home for a summer paradise of cooking classes, and her latest book, Ikaria ($35), won her an IACP award last year for Best International Cookbook.

Kochilas obviously knows her way around Athens—she even has an app called Taste Athens, which can point you to a whole vacation's worth of authentic meals—so for this challenge, we knew who to call. From holes-in-the-wall to more modern Greek dining experiences, here are the four spots not to miss.

① Kriti
The first rule of Kriti is to always talk about Kriti. "A friend introduced me to it, and word of mouth is more or less how they market the place," Kochilas says. "It's named after the island of Crete and is one of those sui generis Athenian restaurants—a place you'd never stumble across if you didn't know it. I love coming here for lunch and often make the trek if I am downtown." Kriti is located inside a covered portico in central Athens and plays host to everyone from workers on their lunch breaks to expat Cretans looking for a taste of home. The reason it's so sought out: the excellent, traditional food. "Kriti is a small-plate concept, and most people here eat while sipping the island's fire water, raki." Kochilas loves it all, but she shares a few of her go-tos: "I love the fried olives, with their thin, grainy, crisp coating. And I'll indulge in some local Cretan charcuterie, like the apaki, a vinegar sausage that is grilled and served with lemon. The handmade little pies, filled with greens and a Cretan whey cheese called myzithra, are also great. They also do these great mushroom caps roasted with staka, something between ghee and a soft, tangy yogurt cheese, which is a very old dairy product on the island." 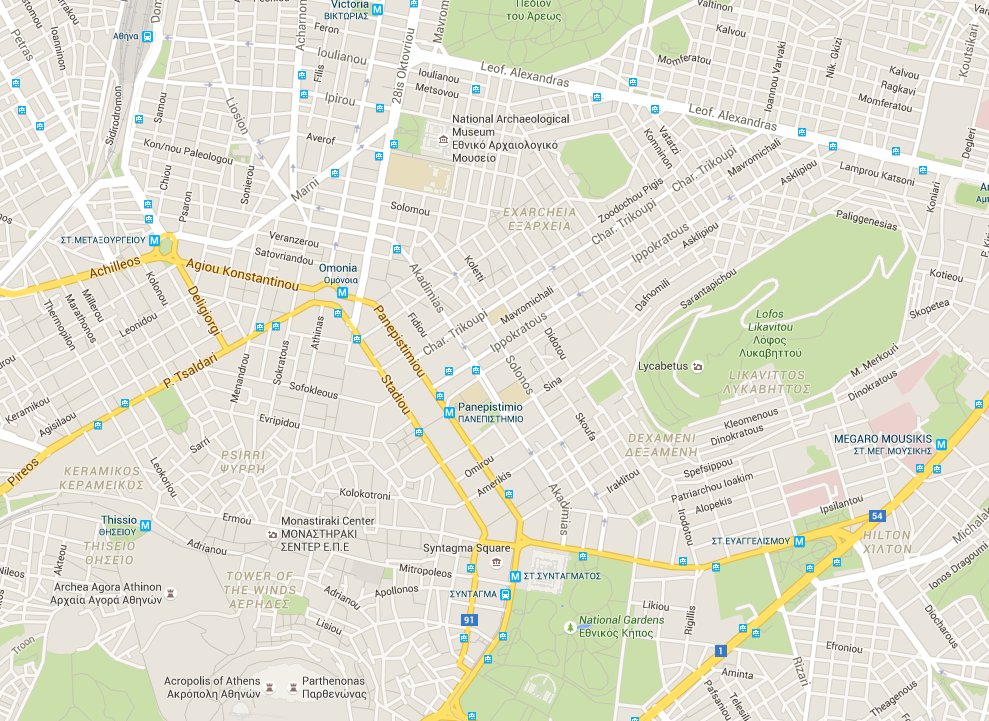 ② Stani
Forget every yogurt you've ever bought from the store. "You haven't tried yogurt, Greek or otherwise, until you taste this stuff," Kochilas says. Founded in 1931 in a region with a high concentration of dairy exports (think Fage), Stani is now the oldest yogurt shop in the city. "The regular yogurts have a delicious, creamy skin on top," Kochilas hints, "but the strained yogurt is so thick the waiter cuts through it like cake and serves it forth in a triangular wedge, drizzled with honey if desired." Besides yogurt, there are also fresh cakes and loukoumades, honey-soaked puffs of fried dough that are ubiquitous—and rightly so—throughout the country.

③ Mavro Provato
The name translates to "black sheep," but the only thing that could possibly make this place an outcast is how comfortably recluse it is. Located in Pangrati, right near the world's first Olympic stadium, this relatively new spot is Kochilas's favorite taverna, and as she describes the menu, it's easy to see why: "The food is really fresh and pretty healthy, like most Greek food; the lentil salad with orange and fish is wonderful. My two favorite dishes here, though, don't quite make the healthy category: great Greek fried potatoes with pungent oregano and grated cheese, and thick pasta topped with browned butter and grated Greek sheep's-milk cheese."

④ Mono
Exposed stone lines the wall, and tabletop chandeliers illuminate plates of almond-crusted chevre and beef cheek that's been cooked sous vide for 72 hours at this slightly fancier spot. To the meat-averse, fear not: Kochilas says "there's a lot of great vegetarian fare on the menu" at this contemporary Plaka restaurant and also some "cutting-edge Greek dishes that are almost always interesting. Their traditional Greek fisherman's soup, spiked with ginger, is great."

More 3 Ways to Cook with Greek Yogurt
Want the inside scoop?
get the latest recipes, news and hacks from tasting table
THANKS FOR SUBSCRIBING!
Please check your inbox to verify your email address.