When Does a Restaurant Become an Essential Business?

This article is adapted from the CIA Worlds of Flavor panel, "Feeding Neighborhoods, Feeding Hearts: The Transformative Power of Chefs."

These three restaurant owners pivoted like everyone else trying to survive the economic wallop of the pandemic, but rather than switch from a sit-down spot to a takeout model, adding groceries, or selling takeaway booze to stay afloat, they assessed how the pandemic was affecting their business and employees — and looked to their communities to decide how to pivot.

Their models point to a way forward for independent restaurants.

“Restaurants make sure the streets stay clean. They make sure crime stays low. They help make sure the agricultural system runs. They employ a lot of people, not just in our direct industry,” said JJ Johnson, owner of Fieldtrip in Manhattan.  Read: Restaurants like these are focusing on partnerships that help feed communities and support farmers who need it most. 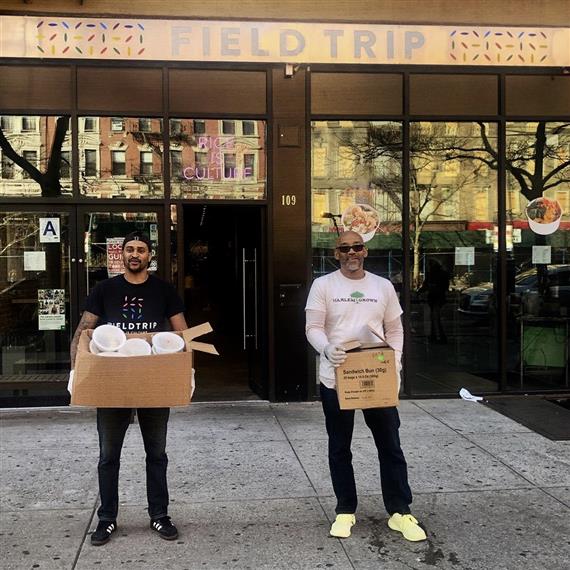 You may know him for food that combines international influences at the former Cecil or when he was head chef at The Henry at Life Hotel. Or perhaps you’ve been to one of the three locations of his fast-casual Fieldtrip, ordering dishes like jollof or a Texas brown rice brisket bowl. But JJ Johnson’s business model for Fieldtrip is more than a restaurant: It allows for flexible ways to feed people who need it.

Feeding the neighbors started when Johnson teamed up with Tony Hiller of Harlem Grown before the pandemic. He started making 200 meals, six days a week, in February 2020. Demand for those meals only rose, so he continued through the summer. Meanwhile, at the start of the pandemic, Johnson's wife, a nurse at Harlem Hospital Center, told him how hard it was to find food at work, so “we started sending food to her team,” he said, which kicked off a rotation of food dropoffs for healthcare workers. In the process, Johnson turned to Twitter for help — and people started matching him and surpassing his initial donation.

“I was working harder than any of my young cooking days,” he said.

The dropoffs marked the start of Johnson’s donate-a-bowl program, which has allowed him to bring back staff — and provide over 100,000 meals. Once hospital workers didn’t require donated meals, Johnson turned to others: Ronald McDonald House, Madison Square Boys & Girls Club, and Head Start North Bronx.

Today, Johnson’s three Fieldtrip locations are back up to 30 staff members. And for every $8 purchased, a child will receive a hot rice bowl. For every $40 purchased, a family will receive three rice bowls and a produce box containing a supply of cookable items for one week, his site says.

Johnson points to a recent visit with congressional leaders on Capitol Hill to explain how flawed the view of restaurants is.“I think we look at restaurants in this time as a luxury, especially in the past administration,” he said. “If you open and stay open, great. If you close, you ran a bad business.”

But that’s obviously not the case; many businesses were forced to close amid mandatory lockdowns and never recovered.

But Johnson believes the view of restaurants as merely a luxury is changing. “I think during this pandemic, we’re shown that restaurants are a necessity; we’re part of this movement toward ending hunger.”

Adrian Lipscombe wears many hats as the mother of four children and a city planner on her way to a Ph.D. in urban and regional planning. The first-time restaurateur put on her city-planning hat to pave the way for Uptowne Cafe and Bakery's opening by holding a four-day community meeting and asking members to address what they wanted the space to be and what they wanted for their community, with city planners and economic developers joining in. Following her 2017 opening, she has cultivated the restaurant — offering dishes like jambalaya or shrimp and grits in addition to breakfast tacos or beignets — as a “community impact space,” a safe haven for the neighborhood amid a revitalization.

Like Johnson, Lipscombe was already tuned into the neighborhood before the pandemic. When it hit, she lost some servers during lockdown — “a lot of them were college students and went home,” she said, while high school workers picked up more hours. And she was able to keep “100 percent of back-of-the-house working.” In addition, she didn’t have outstanding bills.

So when money started coming in addressed to her, or customers bought gift certificates in her name, she wondered, “What do we do with this?”

“I slept on it and said, ‘What about farmers?’” She cited over 65,000 farmers in Wisconsin, less than 2 percent of whom are Black. “I said, you know what we’re going to do? We’re going to put this toward preserving Black foodways and owning Black land, and trying to rediscover the history of what was happening within this area of the Midwest,” said Lipscombe.

Within 24 hours, she launched the 40 Acres Project and has raised over $148,000 of a $250,000 goal. “We really dived into that preservation of Black culture because the food chain supply is crumbling,” she said. She reached out to farmers to see what they needed, noting that many Black farmers had missed the application period for the U.S. Department of Agriculture’s Covid relief.

Her takeaway was that Black farmers needed to own land, so they bought “more than 40 acres” of farmland in South Carolina, with three others earmarked for purchase.

And in the Midwest, they’re working with organizations to adopt more than one property. “I didn’t know the project would get as big as it has gotten, and it’s still developing,” she said.

While the outreach “just from my community alone” has been “amazing,” she said, the hospitality industry has also been super supportive. “They understand how much we need these farmers.”

Tracy Chang opted out of indoor dining at Pagu even when it was allowed and kept the restaurant dining room closed through the present, though customers can pick up dishes like Taiwanese beef noodle soup, various types of ramen, paella, baked goods, and pantry items. But she and her staff are going beyond takeout.

In March, with the help of a regular, Harvard Medical student Natalie Guo, Chang was a lead chef in launching Off Their Plate, a pilot to feed frontline healthcare workers. What started with the delivery of 90 meals to Brigham and Women’s Hospital expanded to nine different cities with 200 volunteers. The group has worked in tandem with World Central Kitchen, James Beard Foundation, and more.

“Once I was able to understand what was required of the restaurant,” she said of those early days, “I was able to connect with friends who specialized in medicine, in safety, and really put together a standard operating procedure for how to do this safely.” Off Their Plate raised over $7 million to date.

When Chang saw needs shift from healthcare staff to essential workers who didn’t have access to food, who lost jobs, etc., she started the second project — an initiative with Dr. Marena Lin, Lily Huang of Massachusetts Jobs with Justice, and chef Irene Li of Mei Mei Boston — named Project Restore Us, which “empowers restaurant workers to package groceries tailored to communities in need,” she said. The group works in conjunction with already established community organizations. “We fill in their gaps,” she said, “and reach their people.”

Rather than putting together a one-size-fits-all approach to food donation, “we tailor the box to community organization's needs for elders, children, diabatic, Chinese, Vietnamese, Latinx, Haitian, gluten-free." Dropping off enough food for four to six weeks, volunteers have streamlined door-to-door delivery logistics to reach essential worker families who are unable to go to markets or food banks because they are immuno-compromised or elderly. Since May 2020 the group has delivered 250,000 pounds of food to over 2100 families.

Another way the group's food donation is different from food banks is that Project Restore Us invests in the supply chain. “The supply has been hurting,” Chang said. “The quality of the product is as good as we serve in the restaurant. And these are lasting, nutritious, culturally appropriate foods.”

As far as staff, she did have to make cuts, but secured grants from the city of Cambridge for dozens of her Latinx team who were not eligible for unemployment. She also works toward ensuring the remaining 20-plus staff is paid well enough that they don’t have to pick up a second job. She secures their income through federal funding, takeout income, and a 20 percent service charge added to each order. “Occasionally, we get pushback, but we explain these are Covid times, and we have to supply a liveable wage, and we have to be safe.” She and her employees carpool to and from work, and through Project Restore Us, she was able to reinstate over 2000 shift hours for workers.

Chang said she doesn’t plan on opening Pagu for indoor dining anytime soon. “We hope that the community will continue to help us and continue to donate and [we anticipate] that food insecurity will continue for 18 to 24 months even if there is a vaccine,” she said. "Food security isn't a problem we are going to solve 'by the end of Covid.' We plan to continue our Project Restore Us initiatives as long as they are needed. We as a restaurant have always been here to feed people in the community, it's just that now we are feeding people who need to eat, not just people who want to eat. We believe in the continued empowerment of other restaurants to do the same, to replicate our model designed with safety at its core, so yes, we plan to continue this line of work."

Chang said she didn’t imagine doing nonprofit-type work until she was in her 50s or 60s, but the situation is “a blessing in disguise,” she said. “We got the opportunity to step up to the plate now.”

NEXT STEP: Check This Out

Want the inside scoop?
get the latest recipes, news and hacks from tasting table
THANKS FOR SUBSCRIBING!
Please check your inbox to verify your email address.