By Devra Ferst
Print Save

Eric Kayser has trouble staying in one place. The energetic and slightly goofy French baker (an animated version of him would have fit in Ratatouille), who owns 156 shops around the world bearing his name, is constantly traveling. On a wintry morning last week at Maison Kayser in Tribeca, just before Jonas struck, he told me he had just come back from Singapore and is soon headed to Saudi Arabia, where his team recently opened a bakery. He's in town regularly to keep an eye on his New York stores, of which there are nine, but on this trip, he was focused on the most classic of his baked goods: the baguette.

The focus paid off. His team just won a contest for the best baguette in the city, hosted by Franco-American online publication French Morning. The win perhaps shouldn't be surprising. Kayser built his professional name on his baguette. He started baking baguettes with a natural fermented starter or levain when he was 16, eschewing commercial yeast, developing his own sourdough mother. Dough made with his first bakery's mother has traveled to each of the 26 countries where Kayser operates bakeries, serving as the base of their loaves.

Over coffee, without prompting, Kayser launched into a mini baguette lecture—one I'm thankful I got. "We have five different tests to recognize a good baguette," he began. (Scroll over the baguette for Kayser's tips.) 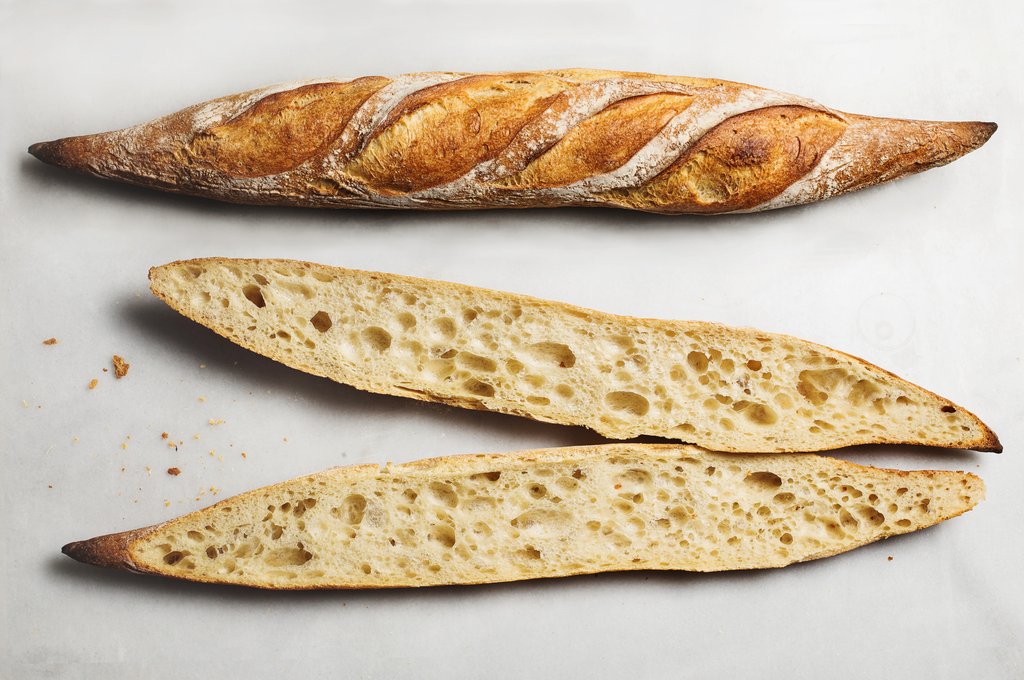 ① Crispy Crust: "The first is to test if the baguette is crispy. So you just take it not far from your head," he said, holding the baguette up to my ear and squeezing the crust just slightly, creating a shattering sound—or a symphony of crackle—it should "sing like a bird," he said.

② It's What's on the Outside That Counts: "See the color?" Kayser asked, pointing at the varying hues of the loaf. "Brown and yellow, brown and yellow. That means that we have the caramelization."

③ And What's Inside: "After you cut the baguette, you see the color. You never need to have white color, but cream color is very important. This means that you preserve the pigmentation inside the wheat," he said, pointing at the loaf that's been bisected as if it were going to be the base of a sandwich.

⑤ Finally, Smell: "You need to smell the baguette. You put it in front of your nose and you push and you see if you can find 200 different flavors . . . so more than wine. It's incredible," he added. I panicked, worrying that he would force me to name them all, but the ability to recognize them, well, that comes with time, he admitted. "Every time you can recognize more—it's a test. Every time you go to a restaurant, you need to try it."

He ripped off a hunk of the loaf and handed it to me. I quickly forgot about the 200 flavors and devoured it.

More How to Keep Bread Fresh
Want the inside scoop?
get the latest recipes, news and hacks from tasting table
THANKS FOR SUBSCRIBING!
Please check your inbox to verify your email address.